A downloadable game for Windows, macOS, Linux, and Android

Down the moor, there's a cursed place. Don't wander there if you cherish your life.

Cursed Place is a Visual Novel made in two parts. The first part was made for the 2022 Amare Jam in the span of the month of April. The second was finished during the month of May 2022.

You've come to the town - a little unnamed thing - in the first train you’ve managed to catch, with naught a plan to follow. In a hurry, you’ve severed all ties with your past, carrying the remnants of your old life in a portable suitcase.

On the station, right where the horse carriages wait for the passengers, you found a note.

Despite the rumors surrounding the manor, you took the note, and headed down the moor.

- around 20k words (full game), and approximately an hour of playthrough.

The Devil - Modesta/Modesto Malyar, the mistress/master of the Opaline Manor. A proper heir, it can be said just from one look at [her/him]. Though ‘proper’ isn’t a word that suits the famed Devil. Flashy and larger than life, lover of all things luxurious, Moodesta/Modesto once had the whole world under [her/his] feet. Nowadays, with only the most expensive champagne for [her/his] company, Modesta/Modesto lives as [she/he] drinks: to forget. 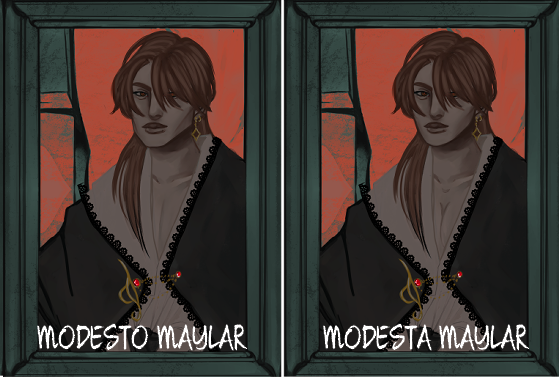 The Specter - a stranger with eyes like daggers, clad in an aura of coldness, guarded behind a wall of secrets and silence. The townspeople say that nobody who’s come in contact with the specter lived to share the tale. Others claim that the apparition, though bloodthirsty and sangfroid, is akin to a fae - fickle but not malicious. Whichever is closer to the truth, you should hope to never find out.

The Maid - shy like a mouse, clever like a fox. The oldest daughter of a large family from the nearby village. Being hard-working and responsible doesn’t conflict with her predilection for daydreaming.

The Lady - the owner and Mistress of the Manor in all but name. A minor noble and the dearest friend of the deceased Lady Malyar. Widowed young, with no family of her own, she overseers the Opaline Manor in [Modesto/Modesta]’s place. In her sparse free time, you can find her in the garden, rolling the beads of the rosary between her bony fingers.

And a huge thank you to Tessy!

Please make the text larger on Android, I can't read it.

Sure thing! The new apk file has been just uploaded. Let me know if the font is large enough now.

I loved the game and Modesto! My only complaint is that I wish it was longer. I can't wait to play more of your games!

Thank you! :D Ah, I also wish either the jam was a bit longer or that I could write, draw, and code faster, so that I could expand on this project. I'd love to eventually add a second route, though, perhaps during the jam this year if it's allowed.

I'm having a weird glitch. I saw in your devlog you said that it was completely finished, but I can only make it half way through the game and I get the "part 1/2" thing and it won't let me continue. I tried downloading it again and starting a new save, but nothing has worked so far.

That is indeed a weird glitch! I just downloaded the file myself and skipped through the game, and it seems to work just fine on my end. The only thing I can think of, since you both re-downloaded and started a fresh game, is some sort of persistent file issue. I did a bit of googling and found this thread on [Reddit], hopefully that can fix it for you. Sorry I can't be of any help here, as I don't think I've run into that bug before. But I will keep looking into that!

I've played all your games (Perfumare is my favourite-- yet to play the IF version). I loved this game too! I wish it was longer and I'm hoping you're planning on making more IF/VNs with werewolves? I feel like it's few and far between and werewolves are my absolute fav :heart_eyes:
Thanks for making such great games!

Thank you, that’s great to hear! :D Ah, I wish I had more time to expand on it too, but alas, I am glad you enjoyed it nonetheless. So, not with werewolves per se, at least not anytime soon, but my new project will have a coyote shifter (werecoyote?). If that’s something that interests you, then stay tuned! Thanks for playing! <3

Of course! I'm always down to play any of your games :)

It was my favorite to write as well, thank you! :D

The writing was really good, I found myself clinging to every word while playing. I could only hope for a sequel, i enjoyed it too much :,)

Thank you so much! I originally intended to add a second route, but I ran out of time and scrapped it after all. I am not saying a definite no to a sequel, I had lots of time with this jam, but for now I have another project on my mind, well, two. :D

I can't load my last save. I get this message :( 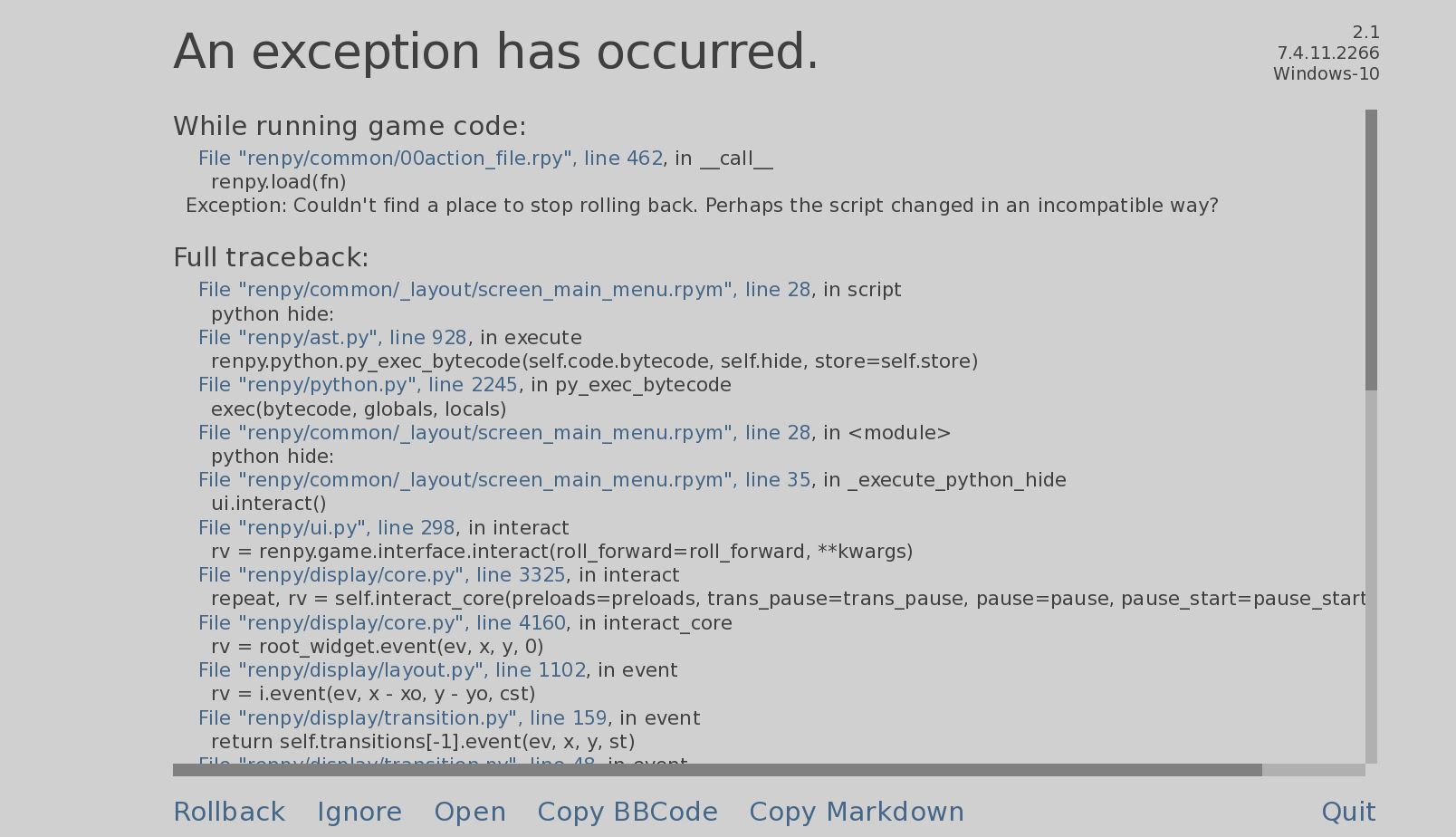 If you're using an older save, as in made before the new version of the game was updated, then that's the case. Due to the changes in the code, old saves rarely work when used on the new update. But let me know if that's not the case, and I'll see what I can do to fix the issue!

Just played the whole game and ah its so good!!! As it always is when playing one of your games <3 I liked the banter between the two, (SPOILER) MC was so cool and so suave, the tension when MC was dressing Modesto up - ahhh!!

I am glad to hear you enjoyed CP. :D Thanks for playing! <3 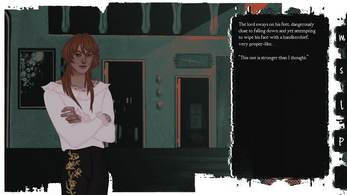 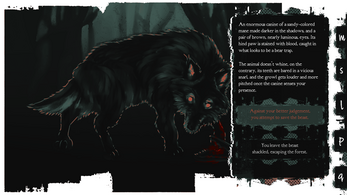 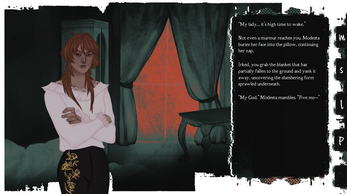 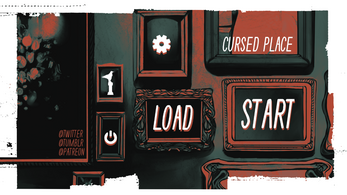 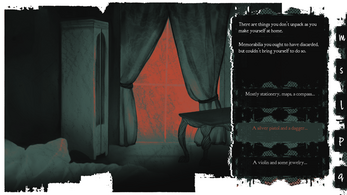